Briskly whisk 3 egg yolks with the sugar, until the mixture whitens and becomes foamy. Then add the marscapone and mix until the result is homogeneous.
Beat 3 egg whites to stiff peaks, adding a pinch of salt, then fold them into the mascarpone cream. Careful, to keep the mixture fluffy and light, the egg whites must not be over-beaten. Fold in delicately from top to bottom with a silicone spatula, turning your bowl by a quarter-turn at a time.
Spread out a layer of mascarpone cream at the base of the dish, then a layer of biscuits that have been soaked beforehand in the beer.  Trim the end of the biscuits so that they stick perfectly to the wall of your dish.  Use the ends to plug any gaps in the centre of your tiramisu.
Repeat the operation, ending with a layer of mascarpone cream that you sprinkle with bitter cocoa powder. Refrigerate for at least 3 hours.

Melt a knob of margarine in a casserole.  Brown the pieces of doe, adding a dash of olive oil.  Finely chop the shallots and add them.  Add the bay leaves and thyme, then the finely chopped carrots.  Brown the lardoons in a frying pan, then add them.  Add the brown sugar, the salt, the pepper, then pour in the Lupulus and covering everything.  Let it simmer on a gentle heat for at least 3 hours, turning the pieces of meat from time to time.  Clean and slice the mushrooms and cook them with a knob of margarine until the cooking juices evaporate, and put them aside.  Shortly before serving, add the mushrooms and the crème fraîche.  Thicken the sauce with the Maïzena cornflour, adjust the seasoning to taste.  Serve with croquettes or 'home-made' fries.

Preheat oven to 150°C (gas mark 5).
Marinate the livers in the port (12 hours). Drain the livers and set them aside.
Mince the three meats (liver, mince and bacon) in the meat grinder.
Add the salt, pepper and blueberry jam to the meat. Mix well.
Pour the mixture into a foie gras terrine.
Place the terrine, without the lid, in a baking dish and pour boiling water into the dish so that about one-third of the terrine is immersed.
Bake for a total of 1h30, but after 20 to 30 minutes, when the terrine is already well browned, cover with the lid. After an hour and a half, remove the terrine from the oven and allow it to cool to room temperature before storing in the refrigerator.
Finally... I suggest you prepare the terrine one or two days before the day on which it will be consumed. That will only make it taste even better. Serve on toast as an aperitif or as an appetizer with a small salad.

Ingredients for a medium-sized tart of 25 to 27 cm diameter:

Pile the flour on the work surface and dig a fountain in the middle.  Sprinkle the salt on the edges of the fountain.
Dissolve the yeast in a tablespoon of warm milk.  Add this yeast in the fountain with a little sugar.  Cover with flour to allow it to rise.
Beat the egg and add it to the fountain as well as the warm milk and oil.  Knead the dough by hand mixing all the flour gradually until the dough is smooth.  Fold the dough with your fingertips to incorporate air (in the same way as when kneading bread dough).  Add the softened butter and stir it in.  Knead the dough, preventing it from hardening.
Leave it to rise for 30 minutes at low heat.  With a rolling pin, flatten the ball of dough and place it in a greased dish, adjusting the fit with your fingers.  Prick the base of the tart with a fork.  Leave the dough to rise for about another fifteen minutes.  Before putting on the garnish, brush the pastry with unbeaten egg white.
Spread out a generous layer of blueberries.  Place the pie in middle of oven for 15 to 20 minutes, thermostat 250°C.  Check that the tart is cooked by lifting the tart from the dish.  Let it cool and sprinkle with sugar.

Extract from "Découvrir l'Ardenne – Cuisine Traditionnelle du Terroir 1" published by ASBL Val du Glain, Terre de Salm.
This dish which is still very popular today with people in the Ardennes is best known in the area around Lierneux. It has very simple ingredients, like all the oldest local dishes.

Cut the bacon into cubes and melt it over a moderate heat.  When melted, add a knob of fat.
Peel the potatoes and shred them.
Add the flour, eggs and milk. Mix everything smoothly. Add a little salt but not too much because the bacon is already salty.
In a skillet over high heat, add a full spoonful of hot fat with lardoons and a ladle of the mixture. Spread it all uniformly so as to obtain a rather thick pancake.  Cook each side until golden brown.
NB: This dish is prepared in advance as pancakes are much better when they are heated up at the time they are to be eaten (and without further addition of fat). 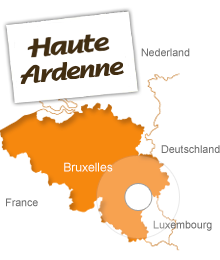